Posted on August 8, 2020 by vintagecookbookery

Well, tomato season is in the works, however, this year I had a few challenges in my  garden:  a beautiful mother bunny and her small charges.  After ordering 8 tomato plants from one of my favourite growers, Territorial Seed Company (https://territorialseed.com),  I planted them, fertilized them, staked them and tended to them several times a day.  They were doing well for about the first 2 weeks.

While I did tend to them several times daily, one of those times was not when it became pitch black in our backyard garden.  On or about the end of the second week, I awoke one morning to see that 2 of them had been gnawed down to about 3 inches of stem and stripped of leaves.  I had my suspicions, so decided to deter mother bunny by sprinkling a very heavy dose of cayenne pepper around the base of each plant, extending about 10 inches outward. 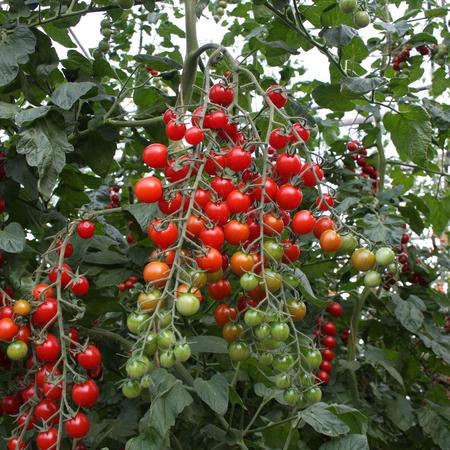 The next morning, 2 more plants had suffered similar fates during the nocturnal hours.  Evidently, bunnies don’t seem to be deterred by cayenne pepper.  That night, I mixed up what I considered to be a seriously off-putting mixture of more cayenne pepper, ground up jalapenos, and some extremely HOT HOT sauce, which I had made previously.  Once again, I liberally spread it around the base of the plants, including the chewed ones.

Well, you can guess where this “tail” is going.  The next morning, one more plant was looking rather bare.  I finally decided that, although the plants really needed a garden to spread out, I would have nothing left if I didn’t transplant them somewhere out of mother bunny’s appetite.  I traveled to our local garden centre, purchased some large pots and transplanted all of the tomato plants including the ones, which had been chewed on.  There was not much left of these, but I thought I’d give it a try.  After transplanting them, I moved them into our outdoor courtyard, surrounded by four walls.  I counted on bunnies not being able to scale 10 foot high adobe walls, or climb trees and leap into the courtyard.  Fortunately, I was correct.

“Bartelly” tomato potted and inside my courtyard

All of the plants, including the damaged ones, have survived and are doing very well, producing a myriad of tomatoes, some of which I’ve never seen before.  Two of them are my favourites:  “Bartelly”, and “Sweet Pea”.  The “Bartelly” tomato plant is now more than 6 feet tall and producing many cherry-sized tomatoes. 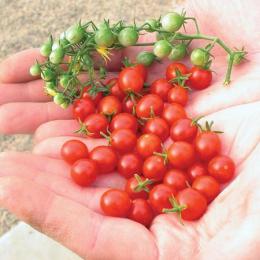 The “Sweet Pea” is truly the “tiny tim” of the tomato world….miniaturized tomatoes, full of flavour.  I pickled some of them this week in a small jar.

Pickled “Sweet Pea” tomatoes. You can see just how tiny they are!

I was wondering if all of the hot sauce and cayenne pepper I liberally dosed the soil with would affect the flavour of the tomatoes, but it didn’t seem to.  Too bad.  Maybe I could have patented a new tomato variety to sell to Territorial Seed Company!

Following the tomato fiasco in the back yard garden, I planted 3 varieties of mint.  To date, mother bunny has refrained from sampling them (thank you very much!).  Next year, I’ll plant mint between the tomatoes, but I have a feeling that she’ll find a way to side-step the mint and go directly for the good stuff!

Cookbook lover and collector with a burgeoning collection of cookbooks. Reading and researching food trends, history of cooking techniques and technological advances in cooking, what we eat and why and cookbooks as reflectors of cultures is a fascination for me. As of November 7th, 2013, I hold the current Guinness World Record title for the largest collection of cookbooks: 2,970 at the official count on July 14th, 2013 (applaud now, thank you very much!) The current (unofficial) number is now 6,500. What next? More shelves?
View all posts by vintagecookbookery →
This entry was posted in Cookbooks, Guinness World Records, New Mexico, Vintage Cookbooks and tagged Albuquerque, cookbooks, Guinness World Record, New Mexico, Southwest, Sue Jimenez, Territorial Seed Company, Tomatoes, Vintage Cookbooks. Bookmark the permalink.

2 Responses to You say “Tomato”, I say “Tomahto”