The “Mulish” Microwave has Died – Will life go on?

Posted on June 11, 2020 by vintagecookbookery

In the fall of 2017, we had our kitchen completely remodeled.  After several weeks of banging, crashing, cursing (both from me and the installation team), dust, strange things falling from the wall after the cabinets were removed, and a few surprises, it was finally done and a joy to behold, as my quote from post of November, 7th, 2017 indicates:

“However, at long last, it was over.  Shiny new cabinets with soft-close doors, a Lazy-Susan, slide out trays and more, a brand-spanking new Corian countertop, a new oven (wider than 15 inches), a re-installed stove top and dishwasher, new sink and faucet, new lights, fresh paint and of course, the mulish microwave back in place, we were finally up and running just in time for Thanksgiving (the Amercun’ one).  Only one more hurdle to go:  soon, the finance man cometh.”

Alas, the mulish microwave, so named because of its’ obstinance and reluctance in giving up its’ long held place on the kitchen wall (17 years!), ceased to exist for all intensive purposes, on May 16th, 2020.  Early that morning, as I approached the kitchen, an other-worldly, SciFi buzzing and whirring sound was emanating from it, akin to some of the soundtracks on the old Twilight Zone series, and it was accompanied by the acrid smells of something electrical burning.  My spouse was in the process of re-heating his morning java.  After shutting it off and surfing the internet for possible explanations and solutions, we decided that it might be worth having examined by a Doctor of Microwaves.

On May 21st, the Doctor of Microwaves made a house call and essentially deemed it “deceased”, although the clock, the light and the timer were still limping along.

We hoped that this might be the fate of our dead microwave, but, alas, we were told that it would be hauled off to the landfill and not be turned into a work of art! (Photo Credit: http://www.ewaste.com.au)

After comparison shopping on the internet, we found what we believed to be a suitable replacement, and, on May 22nd, we trudged over to our local Home Depot.  Lining up with a shopping cart and keeping our feet on the fluorescent red tape demarcating the six feet appropriate “social distancing” between carts (and their people), with masks and gloves in place, we headed to the appliance section.  Armed with detailed specs and measurements, we selected a replacement, which happened to be a GE, as was the former microwave.

People (like us!) lining up at Home Depot during the COVID19 pandemic, perhaps to buy a new microwave? (Photo Credit: http://www.mcall.com)

After ordering details, payment, etc. concluded, we were told that there were some “manufacturing delays”, and the microwave would not arrive or be installed until June 15th. Twenty-four (24) days without a microwave?  Even though I never used the mulish microwave for much other than re-heating, defrosting, warming and other esoteric applications, the thought was disturbing.  I did very little “cooking” with it, although I once or twice tried the “convection” option and found it took about three times as long as cooking in my conventional oven.  Other “cooking” was to bake potatoes or “bake” enchiladas, a New Mexico staple. 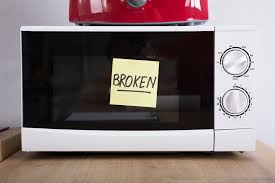 The microwave-less days dragged by.  We were now, unfortunately, reheating coffee in a pan on the stove top, steaming leftover rice in a steamer pot and the like….kitchen drudgery tasks, better handled by the mulish microwave (when it was alive).  “Let’s just warm up the leftovers in the microwave” was immediately met with guffaws and “NOT!” After finally receiving an e-mail confirming the delivery/installation date of June 15th, with instructions (“make sure you’ve measured correctly”…really, after ordering and paying?)  All was well, I thought.

Then, on June 9th, I received a robo-call, which went to our answering machine, with the message “regarding your appliance installation…”.  I found the number on the call display and called and was told by a very apologetic lady that the delivery date of June 15th, was now moved to July 1st, due to “manufacturer’s delays”.  July 1st!?  47 days without a microwave?  Scandalous!  Shocking!  Untenable!  An hour later, I received a second robo-call, indicating that the delivery date, which was apparently scheduled for July 6th (!?) had been moved to July 1st and asked if that was “OK” with me.  I indicated that it was (!$$!!!!)

“What…47 days without a microwave…you’ve got to be KIDDING!” (Photo Credit: http://www.dreamstime.com)

So, presumably, on July 1st, we will receive a youthful microwave to replace the “mulish” one, which has held court in the kitchen in our home since 2000, and where we have resided since 2015.  I should point out that, although I am anxious about receiving a replacement microwave on that date, and although I miss my home in Canada, at least I will have a microwave by the end of the day, July 1st, 2020 (hopefully).  If I were still back in the Great White North, I would have had to wait until July 2nd, as July 1st is “Canada Day“.  My Canadian flag will be flying and I’ll also have a new microwave! (maybe!) What a day to celebrate!

UPDATE:  On June 27th, I was advised that the new microwave will not be available until AT LEAST July 16th (presumably of this year!).  Nonetheless, I will still be flying my Canadian flag on July 1st, for Canada Day. 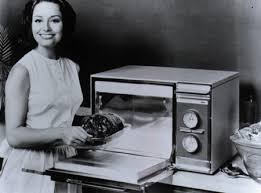 “This is our new microwave….isn’t it cool? And, just in time for Canada Day….Bonus!” (Photo Credit: http://www.smecc.org)

Cookbook lover and collector with a burgeoning collection of cookbooks. Reading and researching food trends, history of cooking techniques and technological advances in cooking, what we eat and why and cookbooks as reflectors of cultures is a fascination for me. As of November 7th, 2013, I hold the current Guinness World Record title for the largest collection of cookbooks: 2,970 at the official count on July 14th, 2013 (applaud now, thank you very much!) The current (unofficial) number is now 6,500. What next? More shelves?
View all posts by vintagecookbookery →
This entry was posted in Cookbooks, Cooking, Cooking and Social History, Cooking Technology, Guinness World Records, New Mexico, Uncategorized, Vintage Cookbooks and tagged Albuquerque, Canada, cookbooks, Cooking, food history, Guinness World Record, Kitchen Appliances, Microwave oven, New Mexico, Southwest, Sue Jimenez, Vintage Cookbooks. Bookmark the permalink.