The Tortures and Trials of Tongue Twisting Translations

Posted on October 16, 2018 by vintagecookbookery

Some time ago, I wrote about the fascinating experience of attempting to translate several foreign-language cookbooks I have in my collection, using several online website translators.  The results, needless to say, were somewhat puzzling and others downright funny. (“Antipooches of heart of beast and of chicken” Huh?) (March 29, 2014)

A clear indication of what will be on your plate. (Photo Credit: http://www.dailymail.co.uk)

I was recently given a copy of “Gran Libro de la Cocina Chilena“, by a very good friend, whose wife was Chilean and passed away a few years ago.  In attempting to translate some of the recipes and instructions, I ventured, once again, into the nebulous world of translating from one language to another, in this case, Spanish to English.

Now, one might think that Spanish to English would be a pretty straight forward kind of exercise, not fraught with too many issues as it might be if you were trying to translate Kazakh to Afrikaans. 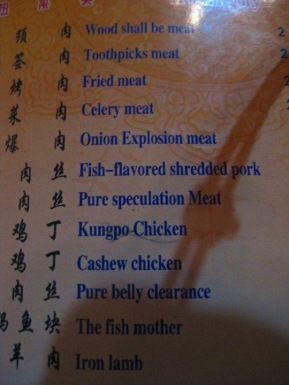 Wow. You can find anything at this restaurant, according to the translations! (Photo Credit: http://www.vaviper.blogspot.com)

I pulled out a few random samples, both in recipe titles and instructions, for your delight and amusement and subjected them to three different online translators.

Don’t bring your kids to this place, if the sign is correct! (Photo Credit: http://www.smosh.com)

So many choices, it’s hard to pick. (Photo Credit: http://www.forums.animesuki.com) 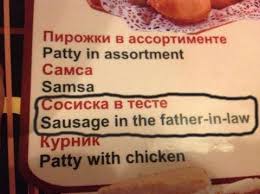 Bring your mother-in-law for this one. (Photo Credit: http://www.indutch.com)

If you are fond of oysters, you might need to know that the recipe “Ostiones al Estragon” could be either “Large Oysters to the Tarragon“, or “Oysters at Havoc“, which sounds much more fascinating.  “Fritos de Arroz” seems pretty mundane, when translated into English:  “Rice Fried Food“, “Fried Food of Rice“, or “Fried Rice“.

It’s not clear if this is what the food is or what the outcome will be after you’ve eaten it. (Photo Credit: http://www.kenwoodtravel.co.uk)

I found that the translation for “Acelgas a la Diabla” was rather mysterious.  Depending on your preference, it could be translated as “Spinach Beets to the Whore“, “Spinach Beets to the Devil“, or “Chard with the Devil“.  I really have no idea what “Peritas Borrachas” is, but according to the translations, it could be “Drunk Experts“, “Expert Leather Wine-Bottles“, or “Adept Drunk“.  I prefer the latter translation as it is much more colourful.

This could be an adept drunk or a “Peritas Borrachas”. Is drinking, while riding a bull legal? (Photo Credit: http://www.app.com)

Fancy Goose with Orange?  “Ganso al Horno Con Naranja” gives you a few options.  You can take your “goose to the stove with orange“, or take your “goose to the oven with orange“, or have your goose baked with orange.  If you prefer duck, you might cook “Pato a la Gallega“, which translates as “Duck to the Galician” or “Galician Duck“.  I did learn that the Galicians are a “national, cultural and ethnic group whose historic homeland is Galicia, in the north-west of the Iberian Pensula” (www.wikipedia.org) 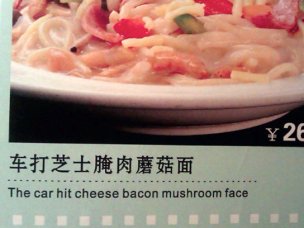 Chinese to English translations are so much fun! (Photo Credit: http://www.readersdigest.com)

Now, one of the more fascinating and difficult to understand translations was “Zorzales con Repollitos de Bruselas“, which turns out to be “Thrushes with Bruselas Rechicks“, “Thrushes with Rechicks of Bruselas“, or, more mundane:  “Thrushes with Brussels Sprouts“.  Likewise, I was unable to determine exactly what “Chupe de Guatitas” is (animal? vegetable? other?).  According to the translators, it is “Suck of Guatitas“, or “Guatitas Suck“.  Either one sounds slightly obscene.  From what I finally determined, “Guatitas” is tripe.  Like I said, still sounds obscene. 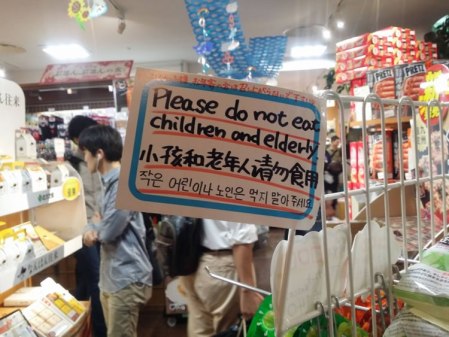 Another place to avoid taking the relatives. (Photo Credit: http://www.funmedianews.com)

Lastly, I revisited a recipe I had previously found in a Spanish cookbook, “Anticuchos de Ternera“.  Pick your favourite:  “Veal Anticuchos“, “Veal Ant Pusses“, or “Antipooches of Veal“.  They are all so descriptive that my mouth is just watering to try it (whatever it is) 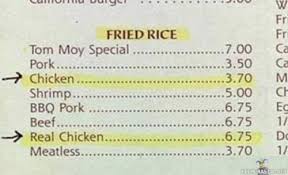 Whew! This is certainly good to know! (Photo Credit: http://www.imgur.com)

So, brighten up your day and have fun trying to translate foreign language recipes.  You might be surprised (pleasantly, I hope).

(that’s Klingon for “Eat, drink and be merry!”, or at least that’s what the translation site said!)

Cookbook lover and collector with a burgeoning collection of cookbooks. Reading and researching food trends, history of cooking techniques and technological advances in cooking, what we eat and why and cookbooks as reflectors of cultures is a fascination for me. As of November 7th, 2013, I hold the current Guinness World Record title for the largest collection of cookbooks: 2,970 at the official count on July 14th, 2013 (applaud now, thank you very much!) The current (unofficial) number is now 6,500. What next? More shelves?
View all posts by vintagecookbookery →
This entry was posted in Collecting, Collections, Cookbooks, Cooking, Cooking and Social History, Food Trends, Guinness World Records, New Mexico, Recipes, Restaurant Menus, Uncategorized, Vintage Cookbooks and tagged Albuquerque, cookbooks, Cooking, foreign translations, Guinness World Record, menu translations, New Mexico, social history, Sue Jimenez, time capsules, Vintage Cookbooks. Bookmark the permalink.