The Elephant Has Found a New Home !

Posted on December 2, 2014 by vintagecookbookery

Regular readers might have come across my post of September 22nd, 2014 “A Vintage Cookbookery Mystery: What do Pachyderms and Cookbooks have in Common ?” Well, my current cookbook collection weighs in at approximately 8,900 pounds, the average weight of an African elephant. Actually, that’s not really true: since the September 22nd post, the elephant has gained another 175 pounds (read: an additional 89 cookbooks). We debated about moving him to a new location, but thought it might be too mind boggling. In the end, however, it became essential to give him room to grow, but the logistics of moving him to his new abode are proving somewhat challenging.

I found a website (I can’t remember the name), which allows you to fill in details about your pending move by zip code, approximate date, number of rooms in the house, and other pertinent details, which I eagerly provided: we had not only the elephant to move, but an additional 1,500 books would accompany him. The site indicated that I would be contacted by up to 12 local movers within 24 hours, with quotes. After 3 days of silence, I finally received a brief e-mail stating that “We sent your request to movers in your area, but unfortunately we couldn’t find anyone who was available, interested, and qualified to complete your project.” No surprise there. 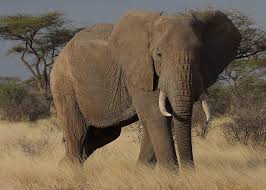 Our dear Pachyderm is only moving 10 miles from his current residence, but what a long (and expensive!) 10 miles it will be! When the mammoth creature started growing in girth and size, it became apparent that I could no longer house him in his current facility and I was forced to seek alternate accommodations. This too proved to be a difficult exercise, to locate a one story residence, with enough room for him to roam about. Finally, after months of searching, I located one and the move will be taking place within the next month or so.

He will have room to spread out a bit more and might even put on a few extra pounds in his new digs, if I encourage him. But not too much. We’re only moving him once! Stay tuned for news of the move.

Cookbook lover and collector with a burgeoning collection of cookbooks. Reading and researching food trends, history of cooking techniques and technological advances in cooking, what we eat and why and cookbooks as reflectors of cultures is a fascination for me. As of November 7th, 2013, I hold the current Guinness World Record title for the largest collection of cookbooks: 2,970 at the official count on July 14th, 2013 (applaud now, thank you very much!) The current (unofficial) number is now 6,500. What next? More shelves?
View all posts by vintagecookbookery →
This entry was posted in Cookbooks, Cooking, Guinness World Records, Uncategorized, Vintage Cookbooks and tagged African elephant, Albuquerque, cookbooks, Cooking, elephant, Guinness World Record, Hatari, Moving, New Mexico, Pachyderm, Sue Jimenez, Vintage Cookbooks. Bookmark the permalink.