It’s Never Too Early to Plan for Thanksgiving or Christmas!

Posted on May 20, 2014 by vintagecookbookery

I realize that after a long, bitter winter for many, the last thing you want to think about is planning for Thanksgiving, Christmas, or whatever winter holidays you celebrate. But, let’s face it. Every year for several years, now, I happened to be browsing at one of the national hobby stores here in Albuquerque, toward the end of June. Sure enough, before you could even say “4th of July”, the Christmas decorations, artificial trees and all of the trimmings were being unpacked and the shelves stocked. Memorial Day had just ended, and there were a slew of upcoming holidays on the calendar long in advance of Thanksgiving and Christmas: Take your Dog to Work Day, Sidewalk Egg-Frying Day, Sneak Some Zucchini onto your Neighbour’s Porch Day, National Play Doh Day, Moldy Cheese Day, Clean Your Refrigerator Day and a few others. So why do merchandisers think we want to deal with stuff associated with cold weather, when we’ve just doffed our mittens and overshoes in favour of shorts and sun hats? Beats me, but that’s the way it is.

“Dessert in Half the Time” By Linda Eckhardt and Diana Butts.

So, in the spirit of pre-planning for fall and winter festivities, I decided to try a recipe from “Dessert in Half the Time” by Linda Eckhardt and Diana Butts, of “micro-rise bread” fame. The recipe, “Mincemeat Pumpkin Pie” is a hybrid of the traditional pumpkin pie and for some, the also traditional Christmas mincemeat pie. 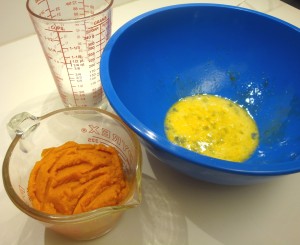 To the beaten egg, add the sugar, spices and pumpkin 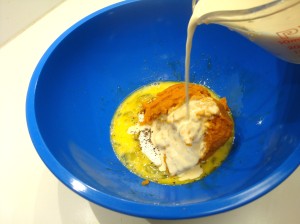 Pour in the evaporated milk

Use your favourite prepared mincement (or make your own)

Spread the prepared mincemeat over the bottom of the unbaked pie crust. 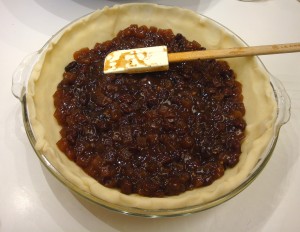 Begin spooning in the pumpkin mixture on top of the mincemeat

Carefully spoon the pumpkin mixture over the mincemeat layer. 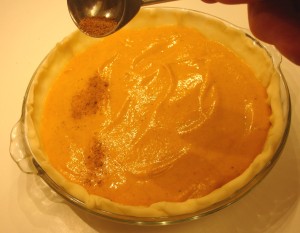 Sprinkle a little of the pumpkin pie spice on top 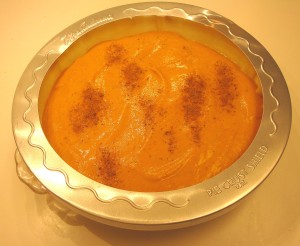 Bake on the middle rack of a preheated oven for 45 to 50 minutes, or until a knife inserted in the middle comes out clean. Cool and serve at room temperature or chilled.

A little browning where I sprinkled the pumpkin pie spice

I started my convection oven at 400 degrees F, and baked the pie for 20 minutes. After another 20 minutes, it was becoming a little brown in spots, but not completely “set”, so I turned the oven off and let the residual heat continue to cook it for another 10 minutes, at which time it was done.

The prepared mincemeat that I used was very sweet, but the pumpkin layer kind of dampened a bit of the sweetness. The only adjustment I’d make is to perhaps increase the amount of pumpkin puree. This recipe uses only 1 cup, and after adding the other ingredients to the pumpkin mixture still left a rather large gap between the top of the pie and the top of the crust. I could have easily increased it to 1 and ½ cups and make adjustments accordingly, in order to bring the level up a bit.

So, if you’re starting to think “Thanksgiving” or “Christmas”, etc, start thinking “Mincemeat Pumpkin Pie”! You’ve got more than enough time to have a few trial runs! 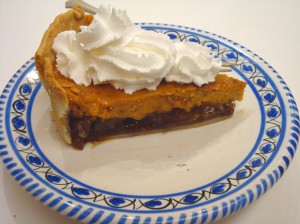 Happy Thanksgiving/Merry Christmas or whatever!

Cookbook lover and collector with a burgeoning collection of cookbooks. Reading and researching food trends, history of cooking techniques and technological advances in cooking, what we eat and why and cookbooks as reflectors of cultures is a fascination for me. As of November 7th, 2013, I hold the current Guinness World Record title for the largest collection of cookbooks: 2,970 at the official count on July 14th, 2013 (applaud now, thank you very much!) The current (unofficial) number is now 6,500. What next? More shelves?
View all posts by vintagecookbookery →
This entry was posted in Comfort Food, Cookbooks, Cooking, Eating, Menu Planning, Recipes, Uncategorized and tagged Albuquerque, Christmas, cookbooks, Cooking, Dessert in Half the Time, Diana Butts, Linda Eckhardt, Micro-Rise, Mincemeat, Pumpkin, Sue Jimenez, Thanksgiving. Bookmark the permalink.