Recipes that Annoy Me

Posted on January 20, 2014 by vintagecookbookery

In reading cookbooks in bed, late at night, I periodically come across a recipe that either doesn’t make sense to me, or downright annoys me. My spouse, already well on the way to dreamland, hears me muttering under my breath and mumbles something like “that’s nice, dear”, before pulling the covers over his head to shut out my rants.

I came across two such recipes last evening, from the cookbook “I am almost always hungry”, by Lora Zarubin, published in 2003.

One of the recipes is “Fingerling Potatoes Steamed on a Bed of Thyme, then Re-Fried”. The fingerling potatoes are steamed along with the thyme, and then cooled. They are subsequently placed between sheets of parchment paper and pounded until ¼ inch thick. Following this, they are fried in olive oil and sprinkled with some of the thyme leaves from the steamer. It may be nit-picky, but I have a problem with the potatoes being described as being ‘re-fried’, when they are fried only once after steaming. I read the recipe three times to make sure I hadn’t missed the primary frying, but there is only one. This is the kind of thing that irks me. “Re-Fried” means to fry something again, after you have already fried it once, like making stellar french fries. A matter of semantics, I suppose, but irksome to me. Did I miss something? 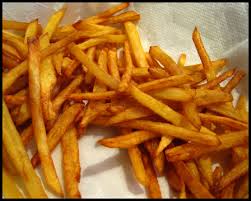 These nice looking french fries are the result of “re-frying”…they were PREVIOUSLY fried briefly.

In the same cookbook, the author has a recipe “Roasted Turkey with Tandoori Spices”. Immediately under the recipe title, in italics is “16 hours advance preparation (optional)”. What does this mean? Reading the recipe for clarification was not very helpful, however, the author does indicate that if you wish to use a wet brine, the turkey should be prepared and brined for 12 hours, so possibly the brining is optional. But the entire 16 hours of prep time noted as “optional” is very confusing. Once again, after reading the recipe several times, the 16 hours of prep time being optional was not clarified.

I once thought about making Nigella Lawson’s “Chocolate Orange Cake”, from her cookbook, “Feast”, to take to dinner at a friend. It looked beautiful and classy, rich and decadent.

The ingredient list included oranges, eggs, baking powder, baking soda, ground almonds, superfine sugar, unsweetened cocoa and orange peel for decoration. In reading the recipe (I had not assembled the ingredients), midway through I read “…cream the butter and sugar with a wooden spoon…” Excuse me? No mention of butter in the ingredient list. How much butter? A little? A lot? In baking, especially, precise measurements will determine if your cake is a hit or a flop! 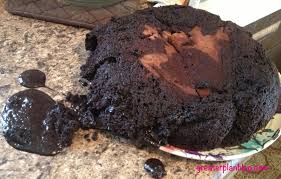 I have a copy of “Paul Bocuse’s French Cooking”, published in 1977. In reading it one night, I happened upon the recipe, “Ham in Hay” and thought it was a cute French term for ham nested in something like fried noodles. I was wrong. 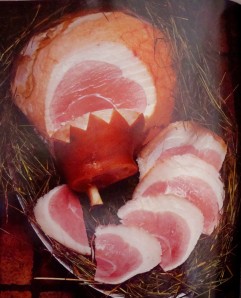 The recipe ingredients include a 6 pound smoked ham, thyme, bay leaves, juniper berries, cloves, and ½ pound of “excellent hay”, fresh or dry. The ham is covered with cold water and the hay and seasonings are placed on top before putting the lid on. Now, I’m not sure how the idea of ham in hay came about. According to the dust jacket, serious cooks from all over America were awaiting the English edition, ever since the French edition appeared earlier. How many cooks have access to fresh hay? Unless you live on a farm, or are within range of a feed store, good luck! And, why hay? What flavour does it impart to the dish? Not a clue.

And from a Chinese cookbook, last published in 1977 by the Fortune Publishing Co., comes “Eggs with Tomatoes”. The recipe calls for eggs, “Accent”, salt, sugar, tomatoes and cooking oil. A note after the recipe indicates that “Other types of meats can be used in place of tomatoes”. I used to think that tomatoes were a vegetable, but have long since learned they are really a fruit, but to my knowledge, they have never been a meat.

The tomato: some think it’s a vegetable, some, a fruit. Then there are those who think of it as “the other red meat”

Some recipes remind me of the day I purchased my first computer, an Epson with a daisy wheel printer (monster of a thing), complete with DOS! I could type white characters on a black screen and save them to this little bendable disc. How cool was that! At any rate, after opening the boxes and placing the various pieces of equipment on my desk, I was directed to plug it in. So far, so good, however, following this, the next instructions in the “recipe” were “configure your machine”. Huh? What the heck does this mean? Some recipes are like that too. Or, the small, portable TV, which I bought a few years ago. The directions clearly indicate: WARNING: Do not watch television programs or turn your TV set on for your own and others’ safety. OK. Can I have a refund now?

What is the most annoying recipe you’ve come across?

Cookbook lover and collector with a burgeoning collection of cookbooks. Reading and researching food trends, history of cooking techniques and technological advances in cooking, what we eat and why and cookbooks as reflectors of cultures is a fascination for me. As of November 7th, 2013, I hold the current Guinness World Record title for the largest collection of cookbooks: 2,970 at the official count on July 14th, 2013 (applaud now, thank you very much!) The current (unofficial) number is now 6,500. What next? More shelves?
View all posts by vintagecookbookery →
This entry was posted in Cookbooks, Cooking, Cooking and Social History, Eating, Recipes, Vintage Cookbooks and tagged cookbooks, Cooking, French Cooking, Lora Zarubin, Nigella Lawson, Paul Bocuse, Recipe Errors, time capsules. Bookmark the permalink.